Home
Food
Art, history, tradition, nature and gastronomy in the third weekend of Lugnanese May
Prev Article Next Article

Intense weekend the one proposed by the Department of Culture and Tourism of the Municipality of Lugnano in Teverina in synergy with local associations. A combination that projects one of the “most beautiful villages in Italy” during the warm months, full of cultural and food and wine events.

let’s start Saturday May 21 with the stop of “Walks & Good Taste. Among villages, olive groves and farms” which leads along the Strada dell’Olio Dop Umbria “, crossing paths immersed in holm oaks and olive groves, to visit the world ” Olea Mundi ” Collection and participation in the snack at the Agriturismo “San Valentino” – Suatoni The excursion is in collaboration with the Cultural Association “L’Olivo e la Ginestra”.
For more and reservations: 347.1153245
www.stradaoliodopumbria.it/sabato-21-maggio-2022-lugnano-in-teverina-tr/

For “Il Maggio dei Libri”, Saturday May 21 at 6.30 p.m. in the small square of Via Umberto I, in collaboration with the Italian Institute for Philosophical Studies, the municipality pays tribute to Pier Paolo Pasolini on the occasion of the centenary of his birth with the presentation of the book “Pasolini indomito corsaro (Ed. Homo Scrivens) by Esther Basile. After the greetings of the Mayor, Gianluca Filiberti, and the Councilor for Culture, Alessandro Dimiziani, the following interventions are expected:
– Teacher. Esther Basile – Philosopher IISF Naples
– Benedetta Baiocco
– Maria Rosaria Rubulotta-TIWB Archives
-Roberta Isidori
– video by director Grazia Morace “Pier Paolo Pasolini: the wild pain of being men”
– recorded on video Maria Rosaria Rubulotta

The book. A volume that joins the theme of the workshop, dedicated to the Writing of feelings and in particular to the feeling of gratitude. Basil will attempt to answer the question of why a philosopher wrote a book dedicated to Pasolini. He will wonder what gratitude is, its value in a society like today’s where only profit counts. The starting point is the publication she edited in the name of Pasolini, which is a careful reconstruction of the story, of the travels, of her tormented trial, also with the support of unpublished images (as in the case of the Chia Tower, no longer open to the public), memoirs and documents never studied, in order to better understand the work and its absolute singularity in the literary history of the nation.

Centeneraio of Pasolini. On March 5, 1922, in Bologna, was born Pier Paolo Pasolini, one of the most representative personalities of the Italian twentieth century. An eclectic intellectual who dabbled in a variety of fields – from writing to film, music and painting – and remembered today mostly for his contrarian thinking and acerbic critique of capitalist society, as well as for the space reserved for the last of the company.

The Italian Institute of Philosophical Studies was founded in 1975 in Rome, at the headquarters of the Accademia Nazionale dei Lincei, by Enrico Cerulli, Elena Croce, Pietro Piovani, Giovanni Pugliese Carratelli and by Gerardo Marotta, who served as its president until 2017, the year of his death, around the humanist library built up through patient research in book collections across Europe.

Esther Basil. Philosopher and collaborator of the Italian Institute of Philosophical Studies in Naples passionate about philosophy and literature, she is Pass President of the Regional Women’s Council of Campania for Equal Opportunities, where she was able to experience actions to improve women’s conditions in prisons. from southern Italy and works at the Culture Commission for Women’s Archives. Journalist, creator and promoter of the Narni Festival of Literature and Non-Fiction “Alchemies and Languages ​​of Women” in its VII edition with the recognition of two medals by President Giorgio Napolitano. She is president of the Cultural Association Eleonora Pimentel Lopez de Leon, born within the Philosophical Institute in 1996, present in the cultural field with conferences in Italy and abroad and promoter of 15 summer schools of higher philosophical education in Umbria, Campania and Abruzzo. Her contributions have appeared in the magazine of the Centro Lotario in Milan, in “La Città di Salerno”, she is editor-in-chief of the magazines “Napoli News” and “Wolf”. His other publications on Joyce were published for the Centro Studi Guido Dorso and others on Eleonora Pimentel in Lisbon. He has published poetry collections (Stalattiti, Boccia anno Fragore di un Sogno, publisher and year, Images, Homo writens, year). Creator and curator of the “La tela del Mediterraneo” project, she has been organizing seminars on culture and women’s rights in the Mediterranean for 15 years at the Superintendence of the Archives of Campania and at the Philosophical Institute. He is a member of the Rome Human Rights Committee and of the Basso Foundation. She is curator and creator of “Quaderni di Narni” for the Festival Mémoire du Narni with publisher Aldo Putignano and co-authors Lucia Daga, Maria Stella Rossi and Maria Rosaria Rubulotta, artistic director of the festival. Under the aegis of the Italian Institute for Philosophical Studies in Naples, he organized the first edition of the Literary Prize “The Iguana” at the Castle of Prata Sannita, dedicated to Anna Maria Ortese.

Maria Rosaria Rubolotta, documentarist of the Institute of Philosophical Studies of Naples and head of the UOS Radiology Day Hospital of the Pascale Institute of Naples. The municipal administration thanks the municipal secretary Roberta Isidori for her collaboration. 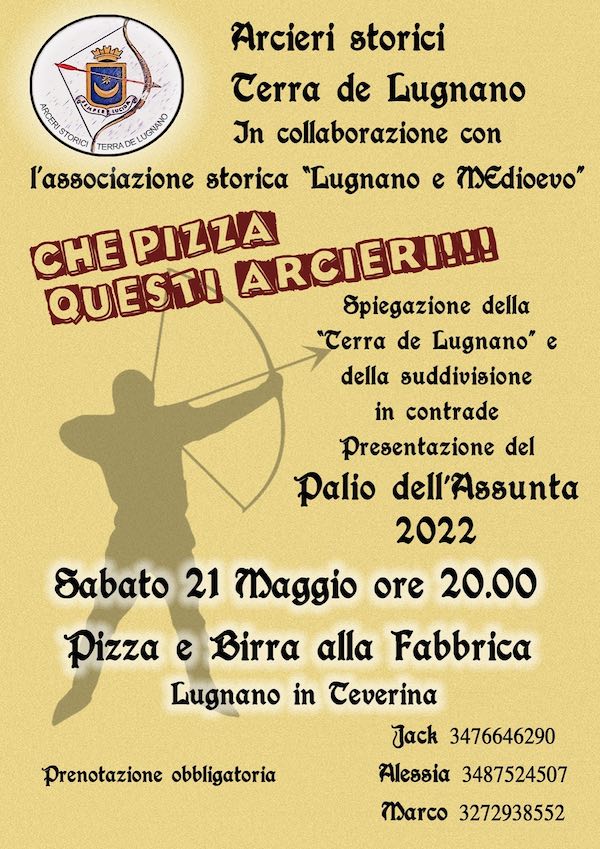 At the end of the day of the third weekend of Maggio Lugnanese, finally, an appointment with history and tradition. The “Lugnano & Medioevo” Association presents the new associative season, with events involving the group of archers, which has now become a local reality with more than ten athletes from Lugnano ready to challenge each other not only for the Palio dell’Assunta with the districts but also for the challenge of the Umbrian villages scheduled for September. During the evening, after a roundup of pizzas and good beer, we will retrace the historical events that led to the subdivision into quarters in medieval times up to today’s reconstructions, taking as reference the studies and research of two mayors of the past such as Enzo Santacroce and Terzo Pimpolari who devoted part of their mandates to the study of the documents preserved in the archives.