Home
Food
For Delmastro (Fdi), companies are in crisis “because of income”. Quarrel with Licheri (M5s) on A7: “The shepherds have no food and you want more weapons”
Prev Article Next Article

Gun cotton controversy “Omnibus” (A7) between the senator of M5s, Ettore Licheriand the deputy of Brothers from Italy, Andrea Delmastroon increasing military spending to 2% of GDP.
Licheri reiterates the position of the M5s and Giuseppe Conte“M5s has already expressed in all possible forms the maximum support for the Ukrainian people and their president. And we will vote for the Ukrainian decree, that is, the supplies of medical and military assistance will be guaranteed, as we have always said. The agenda presented by the Brothers of Italy is different – he explains – that, apparently, the government wants to support. That is to say, we are talking here about a finance law which should lead to an additional 6 to 12 billion in state military expenditure. International commitments are certainly respected, but first we must face the agricultural and economic emergency in Italy, that is to say, we must first assess the deadlines and methods”.

Russian-Ukrainian war, Abramovich present at the negotiator talks in Istanbul: the oligarch framed by the cameras – Video

Delmastro accuses his colleague of the inconsistency of the M5s, fiercely criticizing Giuseppe Contecalled “Dr. Jekyll and Mr. Hyde “:” This man wears different uniforms because he has no identity, but I remember that in all his government parables he kept those commitments”.
The clash erupts when Licheri points out to Delmastro that people’s needs are a priority, including high bills, companies in crisis and agriculture on its knees: “Nobody wants to contravene international commitments. But you want to buy cannons today and today there are our Sardinian farmers and my shepherds who are unable to feed the animals”.
“Of course – Delmastro pops up – with the money you braised with the citizenship income for farmers there is nothing leftother than military expenditure.
“Now it’s the fault of the citizenship income – replies Licheri – If there is no durum wheat, it’s the fault of the citizenship income”. 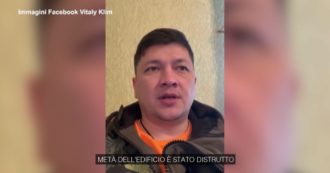 Russo-Ukrainian War, the announcement of the Governor of Mykolaiv Oblast: “The building of the regional administration was hit”

The controversy resumed a few minutes later, when the FdI deputy again accused the Movement of incoherence, arguing that the pentastellato Vito Petrocelli, chairman of the Foreign Affairs Committee of Palazzo Madama, is one of the negotiators. A news harshly denied by Licheri.
Delmastro loose: “You are defending a galaxy that exploded, a party that contained everything and the opposite of everything inside.”
“No – replies Licheri – I defend reasonableness in this country. We lose touch with reality. We need to get out of here and talk to families, workers and businesses.”
“Look at this it was you who paved the way for business more than the pandemic – Delmastro relaunch – During the fourth year of your legislature, you discovered that there are companies. I’m happy for you, it’s a shame that we discovered companies 4 years ago, among other things prey to pentastellate taxes to give citizenship income ”.
“Fortunately, there is the citizenship income,” comments Licheri.