The multipurpose sports facilitybuilt in the 90s, houses on the ground floor an acrylic resin ice rink, a gym for martial arts and a fitness area, as well as changing rooms and service rooms, while on the upper floor there are basketball and volleyball activities, tennis and skating, practiced on a parquet ice rink, and a refreshment point.

Considering the years that have passed since its construction, the building has been the subject of recovery and efficiency interventions, which made it possible to enrich and enrich it. Specifically, some have been phased in fire prevention and earthquake compliance interventions and, subsequently, the resources needed toenergetic efficiency.

For the implementation of energy efficiency works, all possible strategies have been adopted to maximize the results in terms of energy saving and climatic comfort, unlocking access to the Regional Fund for Energy Efficiency.

To achieve the maximum degree of efficiency, they have been planned various interventions both on the building and on the systems.

The work of envelope insulation with external insulation system And covers and the appliance replacement they made a first major contribution by generating significant savings in terms of energy and expenses. The efficiency improvement intervention then looked at systems design, providing a valuable second input.

The drains have remained the same on the ground floor, while on the first floor, where the single zone has been divided into 3 sub-zones, they have been renovated. The existing fan coils have been replaced by others fitted with an on-board temperature sensor and a 2-way valve, guaranteeing the possibility of room-by-room regulation.

While the unit heaters on the ground floor have not undergone any modification, those on the first floor, unable to meet the needs of the building, both in terms of power and air renewal, have been completely removed and replaced. by a set of 4 Hoval RoofVent ventilation units® with integrated heat recovery. 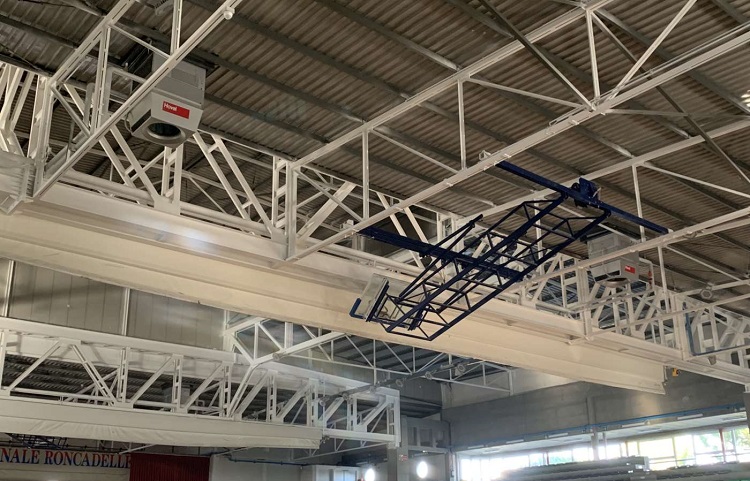 In concrete terms, the original system on the first floor was equipped with an insufficient number of spare parts compared to the maximum capacity and, above all, there was a very significant heat loss due to the ventilation of the ducts, i.e. nearly 4 times that linked to the dispersion of perimeter closures.

In this respect, the ducts present in the sub-stand have been removed and the grilles on the facade have been effectively recovered for the permanent ventilation of the depots.

Instead of the pre-existing heating system, a more modern and efficient system was installed consisting of 4 air heaters / 4 air exchangers with high efficiency heat recovery, able to operate even at a lower temperature, in a way compatible with the new temperatures induced in the system by the heat pump.

the Hoval RoofVent ventilation unit® they are specially designed for the air conditioning of large surfaces and great heights and have been chosen for this intervention thanks to the operation already tested in other sports facilities. 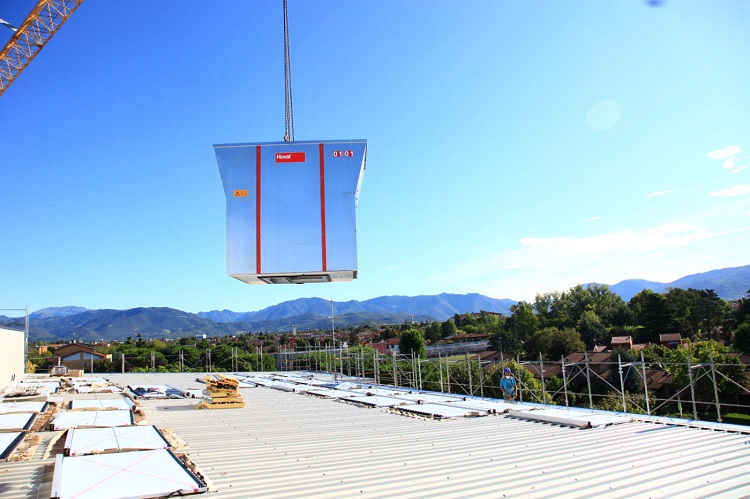 This double flow ventilation / air conditioning system for ceiling installation, equipped with a highly efficient cross flow heat recovery unit, is able to operate in total, partial or total recirculation with outside air and solves the problem of stratification thermal. .

The emission system monitors the values ​​in the field and based on the temperature differences between the supply air and the ambient air, as well as the flow rate of the latter, it constantly changes the entry angle d from vertical to horizontal, automatically or manually by means of a potentiometer.

The transition between the two phases is managed by means of a variable geometry diffusion nozzle mounted downstream of the fan motor, which evenly divides the air and distributes it in the environment.

Benefits of Hoval solutions between efficiency and ease of installation

THE industrial ventilation systems Hoval roof vent® they have a few advantages that make them particularly suitable to be installed in sports facilities or high-rise industrial buildings.

“According to a series of surveys carried out in some sports facilities located in northern Italy – explains the structural designer engineer Marco Finazzi – it has been found that in most cases the stratification in operation is contained to less than 0.2°C per meter of height, compared to an average of nearly 1°C per meter of conventional systems with a hot air generator and entry by perforated piping. In summary, this means that to have 18 ° C on the playing surface according to the CONI standard, with the advanced system, it is necessary to bring the operating temperature to the height of the machine, positioned at a height of 9 meters , at around 20°C, whereas with traditional systems it is necessary to operate at around 27°C. This was an important lever in the choice of Hoval solutions”.

Another advantage is given by the simplicity of installation, as confirmed by the project manager of Enpower srl Mirko Bonattiwhich followed the intervention of the plant’s engineers: “Once the access from the top of the roof was prepared using the crane, the internal and external devices were positioned and the various ventilation units correctly fixed, thanks also to the exhaustive installation sheets and the constant presence on-site Hoval technicians who collaborated with us on the operations Internal connections to the machine make installation even easier: Hoval RoofVent® is the ideal solution to serve sports facilities of this size also because the overall dimensions and impact aesthetics of the systems are reduced to a minimum: in fact, only 4 units were sufficient here to cover all the needs of the first floor”.

Recommend this version to your friends