Orientation compasses, wooden tennis rackets, boxing and goalkeeper gloves, kimonos, darts, needles for inflating balloons, hammocks, armrests for swimming, snorkels, shirts and vests, costumes for all ages. An entirely piacenza “decathlon” a few decades ahead of the development of the French sporting goods giant. For those who remain fond of clothing and sports equipment a little “Vintage” – the shop “Bianchi Sports” in via Taverna is the right place. Here, time has not stood still. All authentic Piacenza, at least once, entered this “bazaar”, which always competes with large retailers and is not afraid of confrontation with Amazon.

At the counter there is always him, the boss, the 87-year-old Corrado Bianchi. Born in Piacenza, after graduating he worked as an accountant for a year in the company of the Casella brothers, which sold fuel. In 1957, together with his brother Mario (deceased) and his sister Anna Maria, he acquired a car parts accessories store in Largo Matteotti. In 1965 they moved via Taverna, to another house number. Since 1968 it has been located in the current premises, at the corner of Cantone del Cristo. The names, over time, have changedti: from “Casa auto” to “Casa auto e sport” and, later, “Bianchi Sport”.

The store has taken care of all sports, but has also been adding more for a few years orthopedic items, given the proximity of the hospital. “The Decathlon is competing with me – explains the owner – they are too strong competitors, so I would like to specialize even more in orthopedic products”.

Mr. Bianchi – let’s try to ask – but how many sporting goods do you still have in the shop? “And who knows? Maybe a thousand”he has answered. Despite the Covid, the crisis in commerce and the historic center is not giving up. “I’m retired, I don’t know what to do anymore, I like to be in the shop. I love to store my things”. He represents an incredible example of attachment to work and commerce. Despite the crisis of recent years and the domination of mass distribution, especially online, he keeps and continues his job.

Bianchi has always appreciated the store’s location. “It is located opposite the Taverna primary school and not far from the old hospital.” In 2020 and 2021, the store observed long periods of closure. “I was afraid of the Covid, in fact when I reopened I decided to keep the door closed. To enter the shop, you have to ring the bell and wait for me to come and open it”.

As a child, the merchant from Piacenza followed cycling a lot. “I applauded Gino Bartali, I preferred him to Fausto Coppi, I liked him more”. Accountant – it is particularly due to the title – also played a football in parish tournaments, in the 1950s. “I played for the parish of San Giovanni, for the Domus and for the Duomo team. There were tournaments throughout the year. I am Inter, I followed with affection the great Inter of the 1960s, the one built by Angelo Moratti, whom I greatly esteemed”. Does football no longer follow him? “No – he answers tersely – there is too much money today”.

Mr. Corrado becomes even more controversial when it comes to the new hospital. He is strongly opposed to the construction of the hospital at the Farnesian. Not the only one, of course, along via Taverna. “We already have a hospital – he thunders from his counter – what’s the point of doing it elsewhere? It’s not even old, it has all the flags. It is enough to create a good parking lot, in the area of ​​the old Acna”. He is very combative on the subject. “The commercial level of the Via Taverna area will drop further, everyone will work less. Someone will move and close by force”.

The owner opts for 88, but still worries about the future of his shop and other merchants in the neighborhood. Enough to display, in the window, a leaflet protesting against the new hospital. But how long do you think you will still be working? “Ah – confides the accountant – I’m going ahead. I would like to keep it open for up to a hundred years. There are absolutely no scheduled closures“. 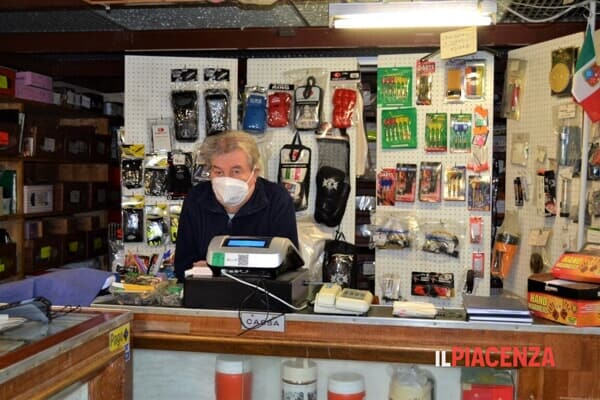