Home
Food
Pesticides in food, the new EFSA analysis minimizes the side effects (but the cocktail effect?)
Prev Article Next Article

In its new report on pesticides in food, the EFSA minimizes, considering that it tends to be safe, the situation of food contamination in Europe. However, the cocktail effect is not taken into account, as the possible health implications are still poorly understood.

Pesticides in food. A problem that affects the whole world, including Europe (and Italy). Evidenced by the new EFSA report, which some describe as “reassuring” for the results obtained but which still seems to us very far from what – at least ideally – we would like, namely the possibility of always eating food without pesticides. .

These include the EU MACP results which, for 2020, sampled 12 food products:

The same products are analyzed every three years to identify trends for each food.

But EFSA’s annual report also includes data collected in the framework of control activities carried out by the various EU Member States, and in this sense Italy has stood out as one of the countries that has carried out the most analyzes on products of national origin but also imported.

Here is a summary of the results of the analysis:

It is precisely for this last aspect that some interpret the results of the new survey as “reassuring”. Only a small part of the samples analyzedin fact, it was forbidden.

But is it really enough for us? How not to consider the risks, still partly unknown, ofcocktail effect? This term indicates the possible side effects of a mixture of residues of different pesticides, even if all within the limits of the law.

Read also: Cocktail effect: pesticides mixed together are harmful to health, even when declared at “safe levels”. The new study

Europe still does not foresee any limitation in this sense.

Multiple residues were identified in 27% of the samples and in one strawberry, the origin of which was unknown, there were up to 35 residues of different pesticides.

Here are the foods in which there were the most multiresidues:

Go on EU MACP subgroup results (12,000 samples) important data then appears on the overall rate of exceeding the maximum residual limits (Lmr). Some products, comparing the 2020 data with those of 2017 and 2014, show an increase in contamination.

The foods that got worse on the pesticide front are:

Looking at the analyzes of the MACP coordinated program of the EU, the overall results are also somewhat different:

The report highlights the presence of a wide range of pesticides in food, including the controversial (and banned) chlorpyrifos, in 327 samples above the maximum allowed limit. This substance is considered dangerous, especially for children, and the EU banned it in 2020, as did the United States in 2021.

Read also: Vittoria! The EPA finally bans the use of the dangerous pesticide chlorpyrifos

Chlorpyrifos has been found mainly in specimens from Turkey, Egypt, Madagascar, Greece and China.

There were also samples in which it was identified glyphosate but especially its metabolite (Ampa), found in 4534 food samples and in animal feed (242 samples). 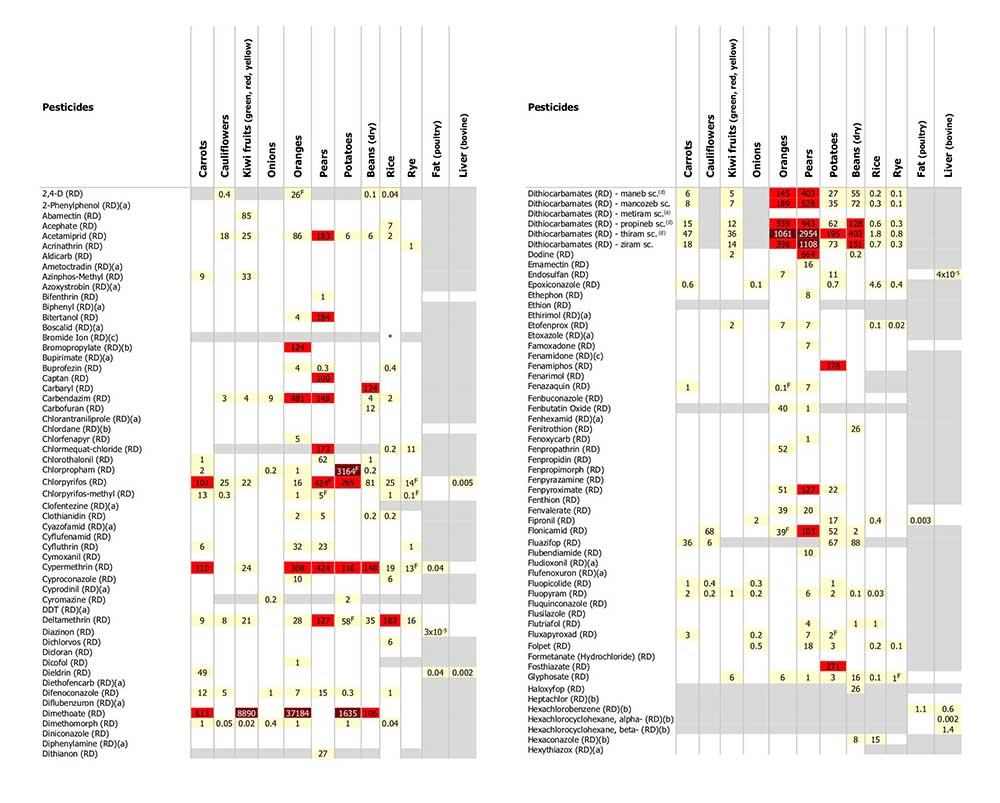 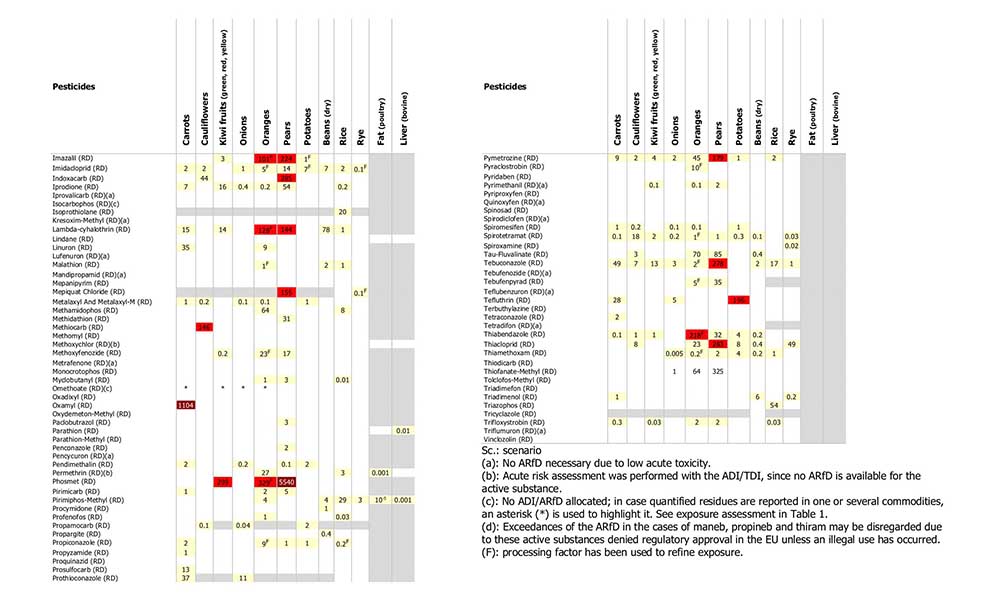 As already mentioned, our country was one of those in which the most controls were carried out in Europe.

Sample non-compliance was identified in 1% of cases, also considering imports. With regard to the latter, 210 samples were taken at the borders and 8200 identified by the Local Health Authority, the Carabinieri Health Prevention and other Authorities.

According to the results:

In the first places between the most contaminated foods in Italy (in which the presence of at least one pesticide has been found) There are:

As for Italian pears, one sample presented 14 residues at the same time but it was not the worst product: 24 active ingredients were found in an Italian parsley analyzed in Germany.

As far as imports are concerned, we must be particularly careful with those arriving from Turkey. Considering the analysis as a whole, indeed, the most contaminated food came from this country.

For EFSA, there is no risk

Based on all the data analysed, EFSA concludes that:

Food products analyzed in 2020 should not pose a health problem for consumers.

Instead, it seems to us that Europe is still a long way from having pesticide-free fruits and vegetables (and other foods). And, given the cocktail effect we talked about above, the safety of what we consume every day could certainly be reviewed as well.