Home
Food
PFA in bags of crisps and other fast food products (including McDonald’s and Burger King), the new investigation
Prev Article Next Article

PFAs are everywhere and even food packaging, such as that in which fast food is packaged and served, is not exempt from the problem. This has been revealed by a new Consumer Reports survey

In a new survey, conducted on more than 100 products used as food packaging by restaurant and fast food chains in the United States, consumer reports found a large presence of Pfas in most packaging.

In the United States they are known as “Forever Chemicals” for their persistence in the environment. We are talking about Pfas, potentially dangerous and unfortunately almost ubiquitous perfluoroalkyl substances in the products and objects that we often use. Today we can also add grease resistant packaging or packaging in which restaurant and fast food foods are served.

Read also: PFAS: what they are, why they are dangerous and they are found everywhere

It is essentially those cardboard bags for fries, wrappers for hamburgers or salad bowls and disposable paper plates with which the various dishes are served.

As we said, the consumer reports analyzed more than 100, the entire US market (but it is clear the likelihood that the problem is widespread globally).

More than half of the retailer packaging examined, including that of the most famous fast food chains (Burger King and McDonald’s) contained Pfas, while almost a third had levels that exceeded a limit set by experts from consumer reports.

As reported in the American consumer magazine, 8 restaurants or fast food outlets tested had at least one type of food packaging that:

exceeded the limit of 100 ppm total organic fluoride, a level that will not be allowed in California starting next year.

Nearly a third of the 37 products then had organic fluoride levels above 20 ppm.

Identify the exact type of Pfas contained in a product, he specifies consumer reportsit’s complex:

there are over 9,000 known PFAS, but common test methods can only identify a few dozen. Next, CR tested the products for their total organic fluoride content, which is considered the easiest way to assess the total PFAS content of a material. This is because all PFAS contain organic fluoride and there are few other sources of the compound.

Among other things, Pfas were also in the packaging of fast food chains such as McDonald’s which has said it wants to phase them out by 2025, as well as Burger King and Chick-fil-A, the two companies having publicly committed to reducing Pfas in their packs. 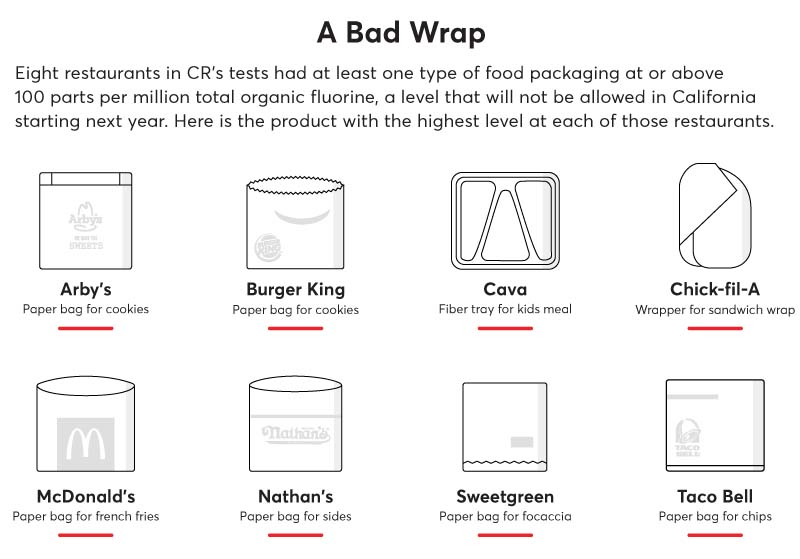 But why all this attention to Pfas? Recall that over the past several decades, exposure to Pfas has been linked to a growing list of health problems, including:

This obviously raises some concern about the use of these compounds, especially in items such as food packaging. As Justin Boucher, environmental engineer at the Food Packaging Forum, a non-profit research organization based in Switzerland, said:

We know that these substances migrate into the foods you eat. It is a clear and direct exposition

Another concern is environmental, as packaging gets thrown away and can end up in the environment. If they contain Pfas, they contaminate water and soil or spread through the air (if the objects are subsequently incinerated).