The integrated urban plan which combines sport and urban forestry and toincrease in biodiversity.

The acronym is captivating. Because “Più Sprint” is not just the set of initials of “Integrated Urban Plan for the Inclusion of Sports Regeneration in the Venetian Metropolitan Territory“.
Instead, it is also a sort of slogan of what the Metropolitan City and the Municipality of Venice intend to bring to the lagoon reality extended to the mainland, giving life to the local projection of the Pnrr.
A wide range of interventions (34 in 28 municipalities) around the engine project of the “Bosco dello Sport“, Conceived as a new territorial epicenter ofsport, sociality, life, inclusion and sustainability.
Time horizon in which to achieve all e 5 I “blocks“The intervention, to be developed on the basis of the principles now laid down in black and white, March 2026.

Funded with NRP resources for more than 93.5 million eurosto which are added almost 190 million in municipal co-financingthe “Bosco dello Sport”, from the general 115.56 hectaresof which 78.99 of wooded area (which will absorb more than 20 million), will be built in the locality of Map.

Inside, immersed in a landscape, will first find a place new stadium in Venice from 16 thousand seatsall insideit’s a’indoor sports arena and for 10,000-seat shows. Then urbanization works internal service to the buildings and the educational area, as well as green and landscaping works.
In addition, the project will complete the new road network between Tessera and Marco Polo airport.

The “Bosco dello Sport” is designed as a multifunctional place, active 7 days a week, fiber optic infrastructure and with the installation of solar panels, in order to be a virtuous example of sustainable economy. A place that can act as a flywheel for building identity through passion and high-level sporting experience, also bringing Olympic level swimming pool (although still not funded). It is a place of promotion of active sociabilityby sharing moments of sport informal, the music And cultural entertainmentwith medical and educational facilities, thanks to the presence of schools and training institutes.

The environmental and urban impact

The “Bosco dello Sport” is part of the green corridor of Tessera, inspired by the principle of urban forestry andincrease in biodiversity.

The connected urban variant is also inspired by this idea, rsignificantly reduce the planned uses and volumes currently provided for by the general regulation plan for the dial area of ​​Tessera.
From 153,780 square meters of building area in fact, they will be intended for commercial, office and tourist hotel purposes volumes for retail parks and new hotels have been totally eliminated.
“The idea of ​​sport of previous administrations – commented the mayor of the Metropolitan City of Venice, Luigi Brugnaro – was linked to a great overbuilding to pay for these structures. This business does not resist today either. With this equipment, we have completely eliminated 600,000 cubic meters of concrete, leaving only the sports facilities, and we have expanded in size, purchasing more land. The resources deployed by the Municipality of Venice come from self-financing made possible by the efficiency of the administrative apparatus– explained Brugnaro again – For me, all this is a dream because in this way Venice makes sport a way of life, but it did not have modern and advanced facilities for large events”. 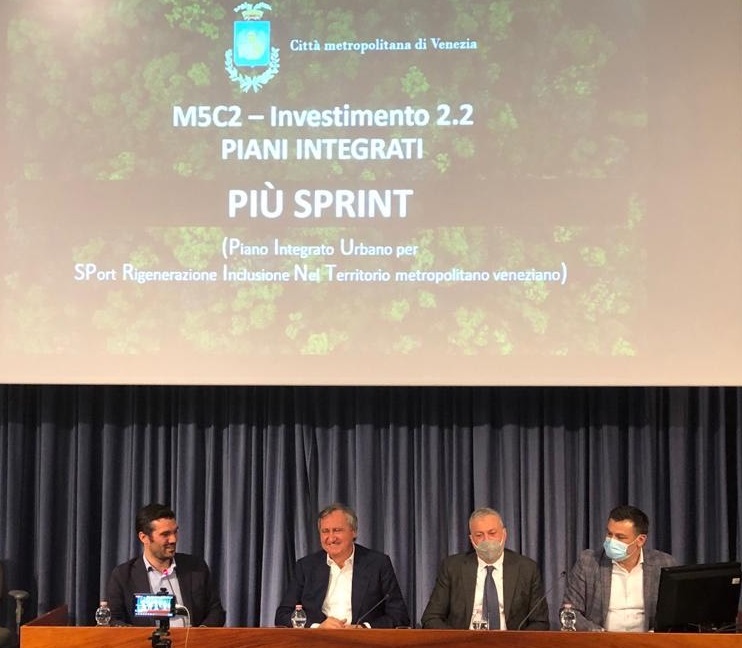 The architectural concept emphasizes the “strong and inseparable relationship between sport, life and health” and favors the continuity between professional sport, deconstructed sport, entertainment and socialization activities and educational activities.

The “Più Sprint” is part of the model, approved by decree of the Ministry of the Interior of December 6, 2021, with which Metropolitan Cities “identify the interventions that can be financed for investments in projects relating to Integrated Urban Plans “in execution of the project line” M5C2 – Investment 2.2 “of the Pnrr.
The objectives, identified by the amended decree, range from promoting a better social integration reduce marginalization and situations of social degradation, to the promotion of urban regenerationto support projects related to Smart citieswith particular reference to transport and energy consumption.

The projects presented appear to be consistent with the Venice Metropolitan Strategic Plan of December 2018. The document identifies a series of large and small works that form the basis of a new development model, including the renovation or creation of multi-purpose sports facilities in all areas of the metropolis.
The Integrated Plan also comes contextualized with some great worksincluding the expansion of the system of Cycle pathsthe rail connection with Marco Polo airport with stop at the stadium,high-speed, high-capacity railhey port and airport development and the third lane A4 Venice-Trieste and the sea ​​street.

As the deputy mayor of Venice, Andrea Tomaello, recalled during the press conference at the Auditorium of the metropolitan city of Mestre, that of “Bosco dello Sport” “can be an interesting investment also with a view to the next Winter Olympics“” In 2026 – confirmed Brugnaro – there are the Olympic Games: we cannot think that this is just a Belluno or Cortina project, separated from everything else. We must feel it proudly ours. There are people who will arrive here: Venice is the Harbor from Veneto and probably from the Po Valley; that of Venice is the third international airport of Italy, in harmony with that of Treviso. Now let’s do this great rail link with the airport and we are in full institutional agreement on this with the Region and the Government”.