L’Aquila European City of Sport 2022, in the capital of Abruzzo, the National Pole Dance and Aerial Sports Championships.

Two aerial dance events, the regional air sports championship and national pole dance and air sports championshipare planned in L’Aquila respectively April 2 and 3 and May 28 and 29. The appointments are part of the rich calendar of L’Aquila European City of Sport 2022 and are organized by the Amateur Sports Association fly factory, led by Professor Ilenia Morena Sciotti Gratti. Presented this morning in the Rivera Room of Palazzo Fibbioni, in the presence of the Deputy Mayor, Raffaele Daniele, the City Councilor for Sport Vito Colonna, the President of the Executive Committee, Francesco Bizzarri, and Erika Esposito, National Responsible for the pole dance sector Csen (National Sports Center Educational Program), will attract hundreds of athletes to the capital.

The pole dancing it is a mixture of gymnastics and dance, it is a sporting activity in every respect. In fact, it is based on the execution of acrobatic figures, which require considerable skills of strength, ease, coordination, agility, flexibility and endurance and which represent a very successful discipline, increasingly more unstoppable and widespread in Italy. The regional championship will take place at the Zeta Theater, in Monticchio, and includes workshops and training courses with teachers of national and international importance and an award ceremony and a show for the closing of the regional event with performances by professional artists. The national championship, which will take place at the Centi Colella university sports center (Cus) will attract around 400 athletes to the city, includes an opening ceremony for the national event in collaboration with the historical group of flag bearers of the city of L ‘Aquila, workshops and training courses with teachers of national and international importance and closing show of the national event with the “Compagnia dei Folli”. “The choice of L’Aquila as the seat of the national championship”, explained the organizers, “is the result of the success that the Aquila athletes of the Fly Factory and their coaches, Ilenia Sciotti Gratti and Stefano Centi, won on the occasion of the Csen-Pole & Aerial Sports Italian Cup in Cesenatico, which took place on October 24, 2021. Thanks to the performances of these guys, L’Aquila will be the scene of an important competition that will showcase our city in the eyes of all of Europe”. “On May 28 and 29, L’Aquila will be the destination of many agonists who will not only be athletes, but 360-degree artists, who will try their hand at unique developments, rich in technique and refined in detail”. “The great attraction of the event”, added the organizers, “will bring to the city names of personalities of national and international renown, also champions of events world champions, such as Sheila Verdi, multiple fabric world champion at the Hong Kong World Championship. and the Aerial Fog Competition International Aerial Hoop Championship in San Francisco, recently won the 2019 Winner Aerialympics All Star Hoop in Portland, Oregon; Rio Ballerani, Italian aerial silks champion; Marko Daza, winner of the world championship in Novosibirsk, Russia, in Pole Art and Laura Borgognoni, podium in the Pose de pole sport and duo participation in the world championships in Liechtenstein, are professional performers and Pole Dance champions”. 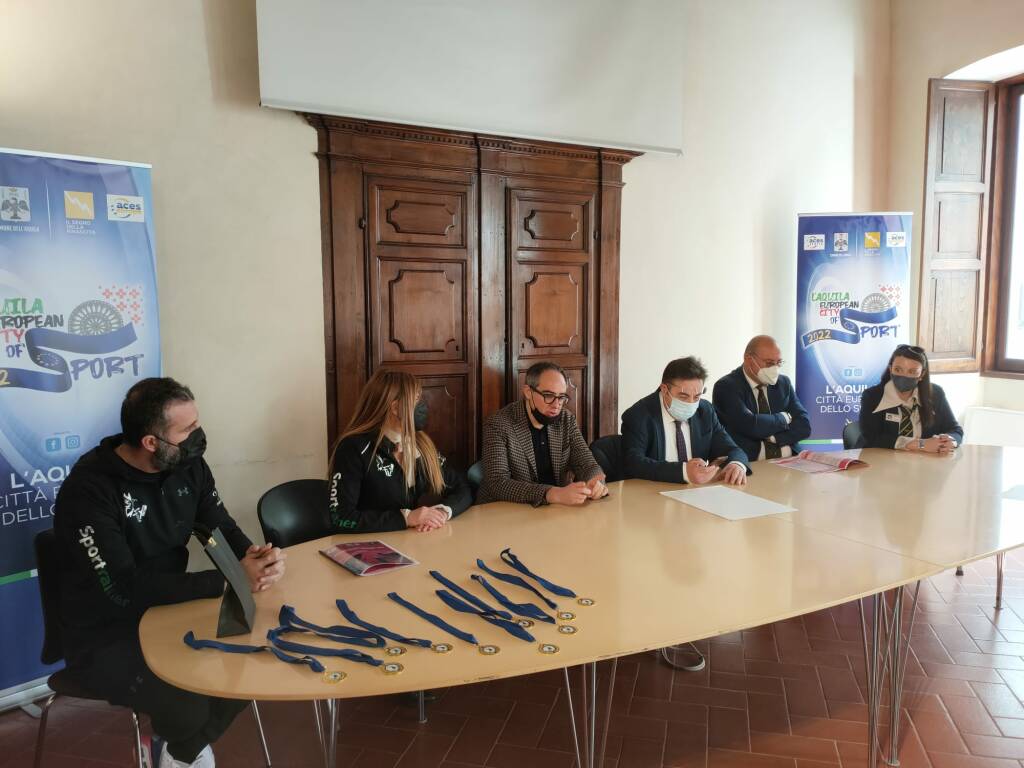 During the days of the event there will be other well-known names of former athletes, current performers, technicians and coaches of these two disciplines, such as Gianluca Gerlando Gentiluomo and Valentina D’Angelo for zone e Deborah Maida for pole dancing. On the last day after the awards ceremony, a performance by these artists will follow. This morning, in the Rivera room of Palazzo Fibbioni, medals were also awarded to young champions Agnese Marziale, Miriam Cetrioli, Alessandro Parmiani, Daniel Crudele, Chiara D’Ambrosio, Gloria Adani, Aurora Scimia, Annika Maria Fantinwho have recently distinguished themselves in the Italian Cup.
Active for more than forty years, the amateur sports association Sporting Club Paganica after the pandemic changed its name to Fly Factory and structured itself to improve the proposal and the spaces, continuing to offer activities related to fitness, dance and the well-being of the community. The pride of the association are the aerial acrobatic disciplines, which the Fly Factory pioneered to spread throughout the L’Aquila region, with great success with the public and participation. These disciplines involve the creation of acrobatic dance choreographies, during which the athlete creates complex and spectacular figures with the pole or suspended from the ground through the use of specific aerial tools (such as cloth, hoop, rope) attached to suitable supports and supports structures.