Home
Sport
SPORT AND INEQUALITY: A BAR TO CHANGE
Prev Article Next Article

In sociology, we would speak of The spirit of the timeshey spirit of the times. It’s a rather abstract German term that invites us to slice the news and examine it from the outsideAgreement what are the trends that cross it at a given and precise moment. In 2022, with a guilty delay, it could be the right time when the stars will come together in such a way as to align men’s and women’s professional sport, placing them at the same level? We can’t say but, as noted above, we’ve recently had some positive hints that something is finally moving.

A few days ago we announced how in football it was a triumphant Wednesday for the pink movement, when the public thronged to the Camp Nou in Barcelona to assist their darlings engaged in an important – albeit unbalanced – Champions League Challenge against fierce rivals real Madrid. On this occasion, it was at the end of March, the highest number of spectators present to watch a women’s football match.

There is now another matter which closely concerns the claim membership in women’s professional sportwhich comes to us this time from the other side of the Atlantic.

The sacredness of a profane temple

They called him The sports brawith an obvious pun possible in English where to move a letter in the word bar we obtain bra, which means bra. It’s a local in PortlandOregon, created specifically to support women’s sports.

It is not surprising that it was chosen to create a bar with this intention. Indeed, in the United States, much more than in Europe, it is firmly established sports bar traditionpremises where you get together to drink and socialize while cheering on your favorite team or sportsman. Sundays – or Saturdays, for the university level – are indeed moments of great sharing, of joy if one wins and drunkenness if one loses. Of course, not all fans can cheer on their heroes – or their favorites – at the stadium or in the gymnasium and prefer to follow the matches in the company of other people.

It’s for them that there are sports bars, places that they fill up punctually during important sporting events. Let’s talk about male athletes. Big games of basketball, hockey, baseball, American football, golf, etc., allow many bar managers to earn generously by filling their rooms. This speechNevertheless, this does not apply to women’s sports. In fact, there are no places, not even in sports bar America, where it is possible to follow a game played by women with the same attention and care. Or at least they didn’t exist. Then came the sports bra. 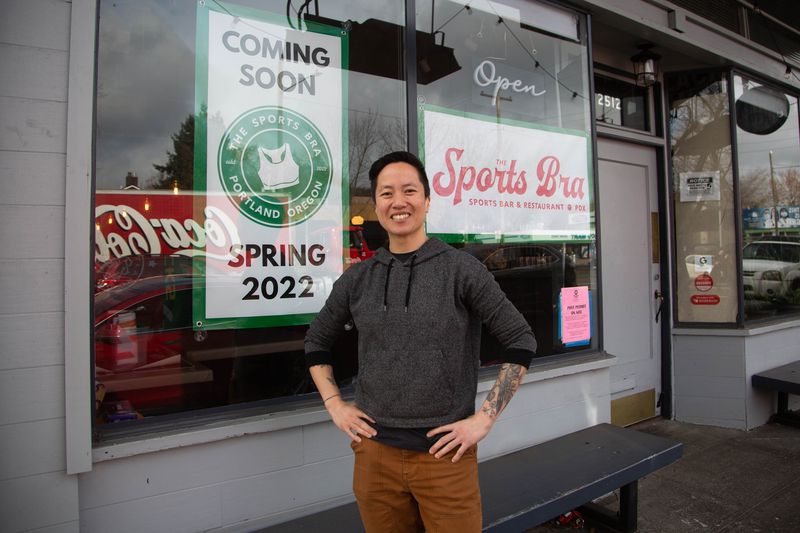 Jenny Nguyen in front of the Sports Bra which opened in Portland. Photo: Oregon Live.

Question of mentality and culture

If it weren’t for the name, with the screens turned off, it would be possible to confuse the Sports Bra with any other sports venue for following challenges between male athletes. IS when using remote controlshowever, that inside change everything. On the liquid crystals of the Bra, indeed, only female competitions are seen and we never zap channels that broadcast matches between men.

The problem in sport is above all cultural. If the media give huge space for the televised transmission of the men’s events, just as little as they grant to those where there are women in the field. UNESCO data on gender inequality show that 40% of professional athletesglobal, is a woman. Nevertheless, it is only 4% of sport rose to have media coverage. This confirms that there is a problem of fairness in sport, and not only.

“That is precisely our approach. We want that 4% to show up and make some noise.”

He stated Jenny Nguyen, founder of The Sports Bra, to the ANSA news agency. A joint study by the Universities of Southern California and Purdue found that in 2019, 95% of US TV sports coverage was dedicated to men’s competitions.

“Equality is not just about the distribution of screen time; equality also means being able to count on what you need to succeed. Women’s sport needs movement, The sports bra communicates this idea. You hardly know the history of women in football.”

However, there is no doubt that increasing visibility is a fundamental step, both to attract women to the sporting world and to create a community of supporters interested in following the team’s sporting achievements. For the foundations of an egalitarian movement to be consolidated, it is necessary ensure pools of athletes of significant size. Data from the Women’s Sports Foundation indicates that, before a little girl is 14be much more likely to quit a sport, with an incidence double that of one of its peers. If then it is a person belonging to the Lgbtq+ communityis even easier to walk away early in the sport and never achieves the spirit of competition.