Home
Food
Ukraine. Sescu (Romanian Food Bank): “Struck by so much solidarity. Long emergency, we must be ready”
Prev Article Next Article

Volunteers from the Romanian Food Bank also help Ukrainian refugees fleeing the war who arrive in Romania. SIR collected the testimony of President Gabriel Sescu. The commitment of the European Federation of Food Banks

“At the start of the war, families who had economic opportunities arrived here at the border. They were the first to flee with cars, vans, taking what they needed with them. They then continued their route to Europe also by plane, by train, by bus, in the hope of being able to return as soon as possible. After three more weeks of fighting, we now see so many people arriving, women, old people, with children and minors, with strollers. They have nothing in their hands and their belongings are all in an envelope or a bag. They tell us that they fled with the clothes they were still wearing. In the shelters equipped by NGOs and humanitarian agencies, they are waiting for a few relatives who come to pick them up”. The tragedy of Ukrainian war refugees told to the SIR Gabriel Sescu, president of the Food Bank of Romania, an organization born a few years ago but already well organized, which has been helping the Ukrainian population on the run since the very first hours. “Immediately after the Russian invasion – the president remembers – the refugees began to arrive and the first to help them were the volunteers of all the Churches, Catholics, Orthodox, Protestants, who organized rescue points in various areas borders with Ukraine. In the tents the refugees came – and are still being assisted – with hot drinks and meals, with sanitary and hygienic kits, warm clothes”.

“As a food bank, we are providing everything needed to deal with this humanitarian emergency which, unfortunately, we believe will last for a very long time. That’s why we have to be ready, not let our guard down”.

The organization chaired by Sescu has collected more than 112 tons of food so far, more than half of which has been sent to the Ukrainian Food Bank and other partners active in the region. “We provide food aid to 72 NGOs and associations, our partners who ensure a wide distribution of food. So far – explains Sescu – we have provided support and hospitality to about 5,000 Ukrainians. However, over time, the needs increase and that is why the Romanian Food Bank is carrying out a campaign to collect food and help in the main shopping centers of the country (110 Lidl centers, 50 Kaufland stores, 40 Auchan stores and 12 Selgros stores) and other companies (Caroli Foods, Danone). All the harvest is shipped by truck and truck to Ukraine. A wave of solidarity also supported by the members of the European Federation of Food Banks (Feba) who are implementing the sending of emergency aid to Ukrainians. 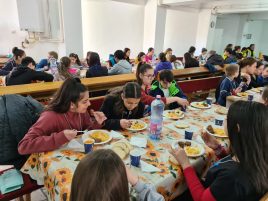 A huge challenge. On March 7, the Feba Conference of Presidents met to gather updates from members most affected by the crisis in Ukraine and to share information on the #AllTogether4Ukraine campaign and actions taken. “We need help – he said Jacques Vandenschrik, President of Feba -. We need non-perishable food, baby food, ready-to-eat food and water. We also need funds to deliver food and strengthen our logistics.” Until a few days ago, Feba had raised around 2 million euros. The Kyiv City Charity Foundation “Food Bank” in Ukraine is still operating in Kyiv and helping the hospital which lacks food. In kyiv, Feba reported, the last food reserves are running out. The food bank also set up two temporary redistribution centers in Chernivsti and Lviv, where Toidupank, a member of Feba in Estonia, delivered 33 pallets of food. “We are struck by so much solidarity. Everyone works hard. The Food Bank of Greece – says Sescu – has sent 2 trucks of food and hygiene products. Other donations are expected from France, Spain, Italy and the United Kingdom from where 4 trucks arrive with help given by the Kellogg company”. 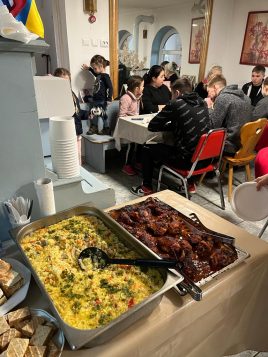 “We are facing a huge challenge, not only inside Ukraine but also outside – admits Sescu -. The number of refugees is growing every day and with them also the needs, not only material We remain on the front line to help these people and it is good to see how many Romanian families living near the border are opening their homes to Ukrainians, they are all women with sometimes very young children, single mothers who don’t know how to house and feed their children. There are a lot of old people. The men have all stayed at home to fight.”