Home
Food
Ukraine, the delivery of food and clothing is inefficient. Better to give money to those who know how to use it
Prev Article Next Article

You know on humanitarian aid could you discuss sending weapons?

It partly happened to me, to provoke and harbor a heated debate social media under a message in which I said that the main humanitarian organizations are asking to stop sending food and clothing to and around Ukraine. It is a somewhat embarrassing polemic, it is necessary very well to distinguish the constructive criticism from the accusation, because in any case it is about good intentions and good works.

Russian-Ukrainian War, inside the Mariupol theater: the images immediately after the attack of March 16 – Video

Experts confirm that in many humanitarian crises, the same question arises, faced with the massive influx spontaneous and uncoordinated assistance by land (but sometimes also by air). It is better to give money to those who know how to use it best, on the basis of precise and punctually verified needs. Those who generally collect “basic necessities”, and especially those who donate basic necessities after perhaps buying them at the supermarket, think that between here – between their Italian commune and the Polish-Ukrainian border – there there is the desert, the sea, bombs, famine? Think it is necessary to travel a pack of spaghetti for 1800 kilometers in a van, spending money hundreds of dollars worth of gasoline or diesel (among others the most expensive in Europe)?

I asked the Polish manager of a refugee camp run by volunteers what they needed. A little bit of everything, except clothes, these obstruct the boundary. I asked him if food, bunk beds, dishwashers weren’t easier to find in Poland. Of course, replied Kamil, you can find everything here, you can also send them to us with local Amazon. But we give thanks for every donation. As if to say: “if to get something for us you have the psychological and emotional need to buy it from your merchant and take it with your vehicle while driving for two uninterrupted days, these are your problems, we agree “. 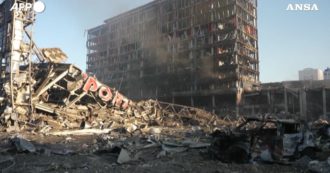 Russian-Ukrainian war, from Putin’s declaration to air strikes: the summary of a month of conflict in pictures – Video

From Lviv, Lviv, the Zero Waste group (which we will talk about shortly for their initiative) points out that the arrival of too many goods such as clothes has contributed send in crisis the waste management system. But, in any case, even when gigantic stowage and distribution problems are not created, the waste of money, time, energy and emissions remains. Trains depart from Germany to Lviv, which they can transport in one go thousand tons. From Turin we boast of having started hundreds of trips to Tir. Of course, refugees are taken care of who want to go to Italy. But the stages in Italy are there all the time, with all sorts of means. I understand who wants to take a famous person, but why did nobody ask to activate the trains? The railway line is there, except that it currently needs to be changed from the Polish-Hungarian border to Milan at least four.

In short, it should perhaps be openly recognized that the need for this assistance for long private road journeys is also and above all a need to be present, give a signal, communicate. From a logistical and economic (and environmental) point of view, they are useless and ineffective. In the social debate that I mentioned, a Milanese sociologist in favor of the “caravan” said that in this way people mobilized and helped traders, who perhaps would not give money for a “simple” subscription. But if large experienced organizations like Caritas Coop Red Cross and many others ask to send money and not to buy/donate/move goods, it is because they know what they are talking about.