Our planet, our health: this is the slogan launched by the World Health Organization on the occasion of World Health Day 2022. A call which aims to remind – if it were still needed – how negatively the climate catastrophe The environmental and environmental stress suffered by the Earth has affected global health for too long, and for which man continues to be the most responsible. In practice, summarizes the WHO, the climate crisis is also a health crisis. And the figures speak for themselves: 13 million deaths in the world each year are due to environmental causes. And on a polluted planet, diseases such as cancer, respiratory and heart disease are on the rise.

Not only. First the CoVID-19 pandemic – which still gives no respite -, now another war, that of Ukraine, at the heart of Europat, which has rekindled the fear of nuclear power and is turning into a humanitarian catastrophe: two new unforeseen cataclysms which have hit the world in the past two years and which will still have serious consequences, who knows for how long, especially in the poorest countries, where food shortages, caused by increasingly difficult agriculture, and by health inequalities, have already caused too many victims.

For global health. Can we imagine a world where clean air, water and food are accessible to all? Where economies are focused on the health and well-being of people? And where cities are livable and where people have their own health and that of the Earth in check?

These are the questions raised by the WHO this year – watch the video above – and to which the governments of the world should respond by promoting urgent and necessary actions that heal, or at least do not worsen, habitability on a planet like ours, where diseased ecosystems endanger biodiversity and human survival.

As WHO points out, more than 90% of the world’s population breathes unhealthy air from fossil fuels, and one of the consequences of global warming is the spread of killer mosquitoes to countries never before reached. Not to mention extreme climatic events: rains, floods, melting ice but also prolonged droughts cause soil degradation for crops and water scarcity, especially uncontaminated water, pushing populations to abandon their land so as not to die of hunger or diarrheal diseases, such as cholera. .

But industrialized countries also have food problems linked to pollution: plastic, which is now found at the bottom of our oceans or in the highest mountains, is part of our food chain. And the market for highly chemically processed foods and beverages is driving a wave of obesity, one of the causes of the rise in cancer and heart disease; moreover, the production of ultra-processed foods generates a third of the world’s greenhouse gas emissions.

WHO: the bet for 2022. “2022 is shaping up to be a very busy year,” concludes the WHO. CoVID-19 cases continue to rise, fueled by new variants and continuing vaccine inequity, as well as ongoing and new conflicts. This has serious implications for health systems around the world, especially in countries facing humanitarian crises. For the first time in WHO history, we are issuing a single appeal that includes emergency health and humanitarian needs for every WHO country in 2022.”

The campaign poster World Health Day 2022 which is celebrated every year on April 7, the day of the foundation of the World Health Organization (April 7, 1948). #HealthierTomorrow
© WHO 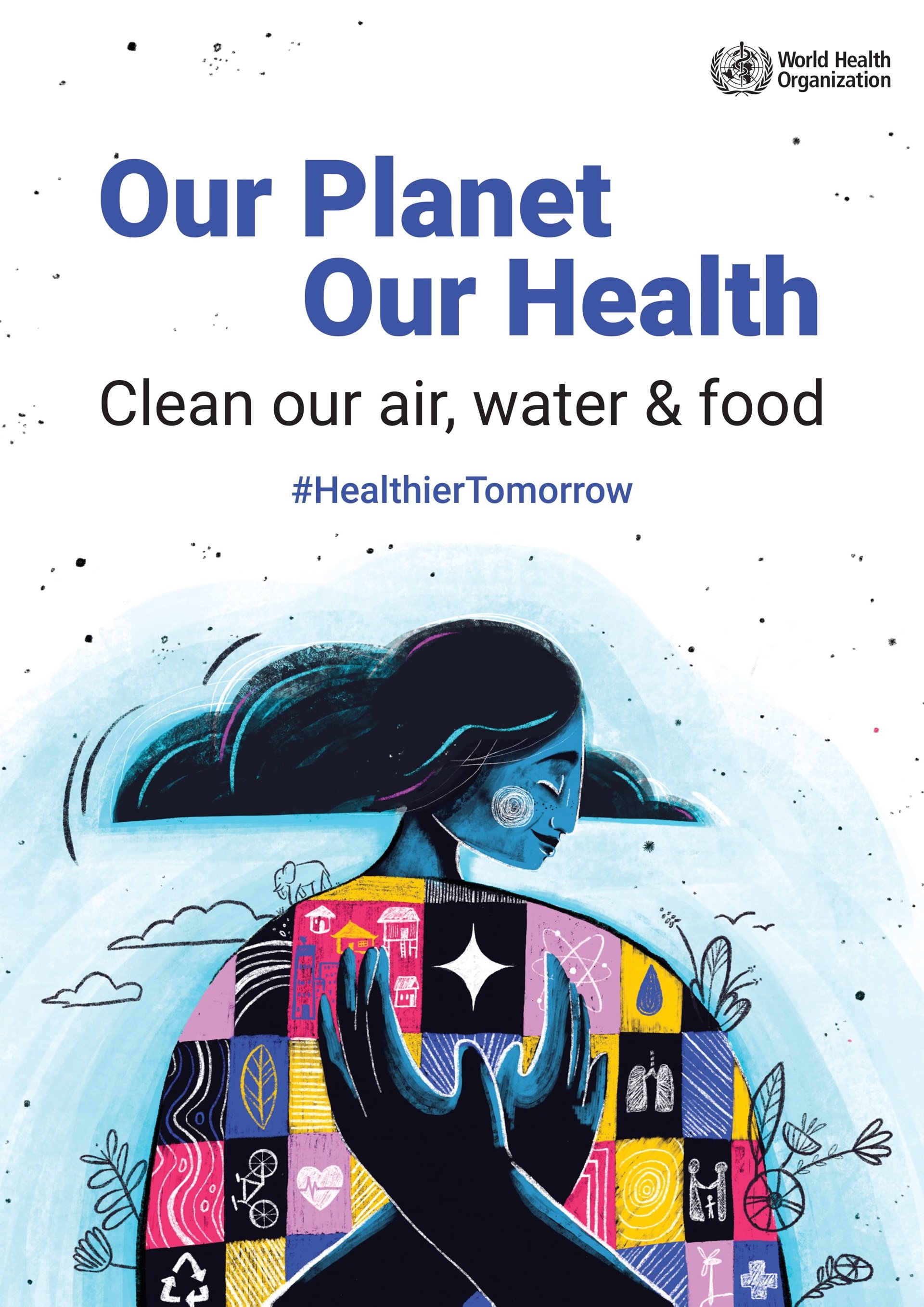 Economics of well-being. “Our political, social and commercial decisions are responsible for the climate and health crisis. The CoVID-19 pandemic has demonstrated the healing power of science, but it has also shed light on inequalities,” concludes the WHO. “The current design of the economy leads to an unequal distribution of wealth, with too many people still living in poverty and instability. Welfare economics, on the other hand, has ecological sustainability as its goals to achieve global health. And those goals translate into long-term investments, welfare budgets, social protection, and legal and fiscal strategies. Stopping these cycles of destruction for the planet and human health requires legislative action and corporate reform; and individuals should be supported and encouraged to make healthy lifestyle choices”.

The goal is clear: to create today, and for future generations, a society focused on well-being: global attention must be aimed at promoting the actions necessary to keep the Earth and those who inhabit it healthy. .